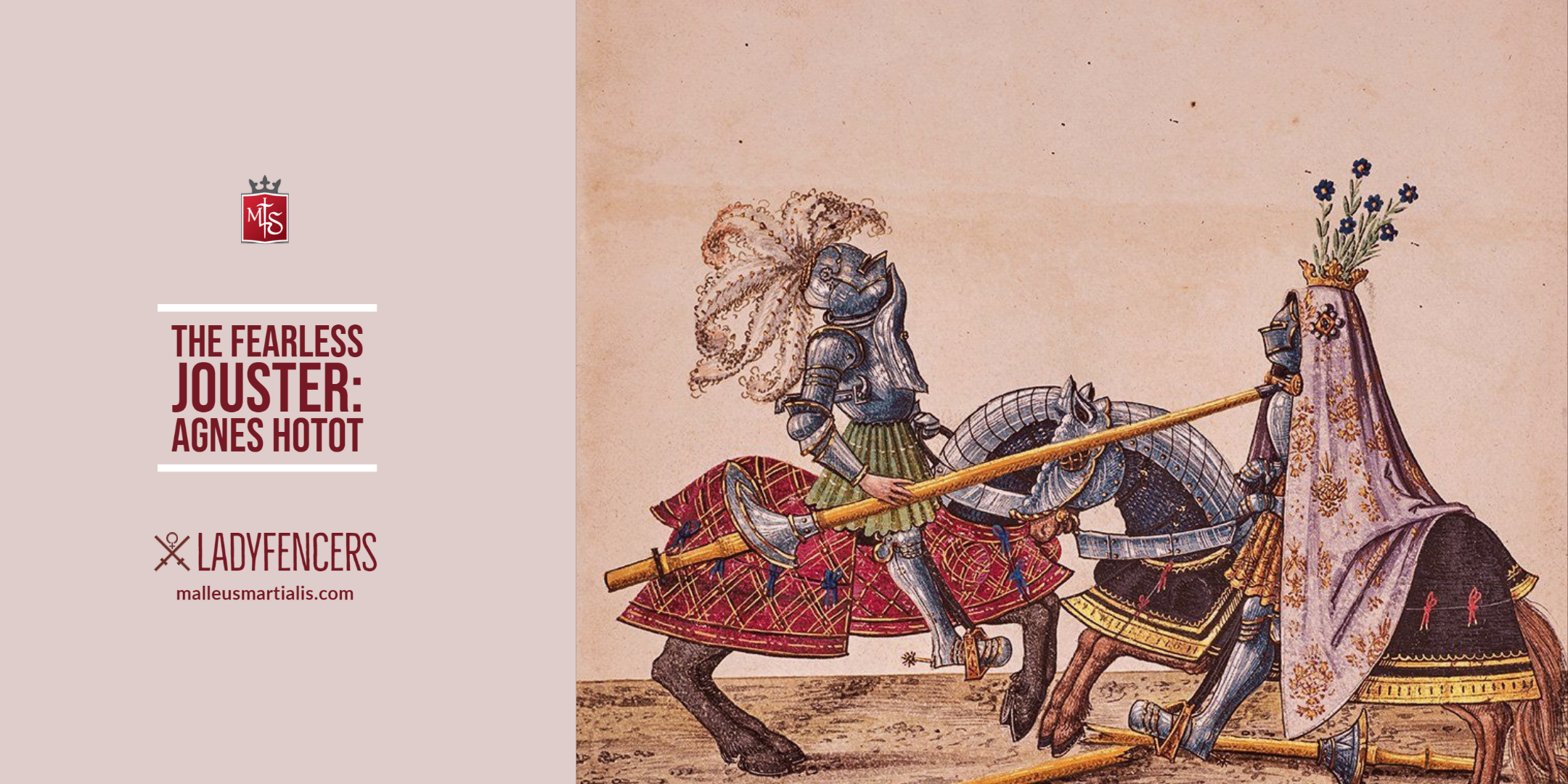 “Girls just wanna have fun” sang Cyndi Lauper in the 80’s.
Breaking the rules is a way to get rid of society’s stereotypes and be pioneers of a new thinking generation. We feel like this from time to time, being fencers and swordmakers.
But going back to the 80’s of 1300, there was a girl, a fearless jouster, who decided to fight for her land to save her father’s honour. Doesn’t this make you think about Disney’s Mulan?
If so, you are a Disney nerd like us and you’re ready to start singing!

Today we’ll tell you the story of an English Fearless Jouster, Lady Agnes Hotot, who left a mark on the thin silver thread between history and legend.

«The milky light of an uncertain dawn washes over the muddy court of the estate of Clopton. The rugged roofs of the buildings struggle to keep the mist out, pushing in from the fields like the last heaving of a receding tide. A small crowd is gathered, the sleepy faces of children holding on to their mothers’ gowns, the men getting ready for a day of ploughing, the blacksmith weighing the tongs in his right hand.»

The narrator pauses for a moment, waiting for the last noises to die out across the dining room.

«Their heads turn to watch the two horsemen entering the improvised list field, flanked by their squires. One is in full armour, donning the colours of the Hotot house, while Ringsley, the challenger, takes a good look around with his dark black eyes, before reaching down for the helmet.
The Hotot family gathers on a balcony, worried but dignified, looking at the two knights; nobody notices the absence of Agnes, daughter and heir of Robert De Hotot.»

«The night before the duel Agnes Hotot was in her room, trying to pray, but could not focus. She was looking at her hands as if prayers could spontaneously spring out of them, but nothing happened. Doubt and worry were clouding her mind. Before that day she never questioned the legitimacy of trial by combat, and she even felt relieved when the long-drawn land dispute between her father and Ringsley was to be concluded in that way. The Hand of God would have guided the righteous man – her father in this case – to defeat the insolent challenger».

His voice rises on the word righteous, triggering a set of approving nods across the tables in front of him. The audience is captured.

«But how would she interpret the illness that struck her father a few days before the duel? The words of her mother were still lingering in the empty room».

The narrator clears his throat, pitching the tone up to imitate a female voice.

«How can you question the Will of God? She said. The illness was sent to test you, and if He wants you taking the place of your father, then you must have faith in Him».

Someone in the audience chuckles, it wasn’t his intention to be funny but a benevolent bit of humour never hurt a storyteller. He picks up the pace from where he left, this time with his own honeyed, firm voice.

«But mother had left after the prayer, and Agnes felt as if she had taken all the certainties of faith with her. She looked at her own hands, not delicate and pale like those of the ladies of Leicester, but thick and reddened by exercise. Because she jousted, and she fenced, since she was just about able to walk. Is this where God is leading me? She thought. Or is this a test, not to challenge His Will?
A few hours later, wide awake in the dark of night, she realised that there was no rational way to solve that. Rather than he should lose the land, or suffer in his honor, she thought, I will take my father’s place».

This time the narrator doesn’t make a thin voice but works a tonal crescendo to punctuate the pathos of the moment, to deliver to his audience the full drama of Agnes’ decision. He loves to tell this story and so many people are staring at him in the banquet hall, silent and wide-eyed.

«The following morning Agnes is helped into her armour by her father’s squire. Only he – and few other family members – knows about that, and she chooses an uncomfortable full-helm with just a slit for the eyes, to completely conceal her identity.»

Now it’s time for the narrator to bring his listeners back to where his tale started: to the muddy court with knights and sleepy children.

«The jousters are ready, facing each other at the opposite ends of the court. For a long moment time stands still and in a heartbeat the whole world explodes into Agnes’ helmet.
The thundering hooves, the pounding heart, the bouncing of her body on the saddle. She deflects the first blow with her shield and, on the second charge, everything becomes clear, she can see more than the slit allows her. Her lance crashes so hard on Ringsley’s armour to send him flying and landing with a dull sound in the mud.»

The audience gasps as if they were witnessing the duel in that very moment. The food is now cold on their plates and their drinks all but finished. The narrator leaves this moment linger and holds out a hand to the lady at his right.

«The Hotot knight turns around, standing a few feet from the defeated enemy, looking at the cheering crowd. Silence falls on the court when the knight removes the helmet to let the long, chestnut-blonde hair flow.
A girl. Fighting. And winning. What they are seeing is so distant from their convictions to make them doubt their own eyes.
What would you have done my friends? Would have you believed that? Perhaps not.»

He grabs a cup of wine and with a sweeping gesture embraces the hall, as if posing the question to each single guest.

«With a quick snap at the leather braces the fearless jouster removes her breast plate, proudly standing atop of her horse, providing the ultimate proof of her true identity and gender.»

The graceful blonde lady sitting by the right of the narrator quietly smiles.

«For the imprudent challenger there was no bigger humiliation than being defeated by a woman. For me, Richard de Dudley, Lord of Barnwell and Clopton, there is no bigger honour than being blessed with a life with such a remarkable woman at my side. So much so that, from now, our family’s coat of arms will be modified to accommodate a symbol of this episode of incredible courage and devotion, might this serve as an example to the future generations.»

If you enjoyed the story about this Fearless Jouster, you might want to check out our LadyFencers series, where we handpick the most incredible women in history – from noble-hearted ladies to downright nutjobs – who left funny or epic stories behind, for better or worse!
Follow us! → Instagram | Facebook

Share:
The Duel of Isabella and Diambra | Ladyfencers series