TOP
How to start a smithy and how to learn the skills of the trade ~ Malleus Martialis Firenze
16674
post-template-default,single,single-post,postid-16674,single-format-standard,eltd-core-1.1.2,awake-ver-1.3,,eltd-smooth-page-transitions,eltd-mimic-ajax,eltd-grid-1200,eltd-blog-installed,eltd-default-style,eltd-fade-push-text-top,eltd-header-standard,eltd-fixed-on-scroll,eltd-default-mobile-header,eltd-sticky-up-mobile-header,eltd-menu-item-first-level-bg-color,eltd-dropdown-slide-from-left,eltd-light-header,eltd-header-style-on-scroll,eltd-fullscreen-search eltd-search-fade,eltd-side-menu-slide-with-content,eltd-width-470,wpb-js-composer js-comp-ver-5.4.7,vc_responsive 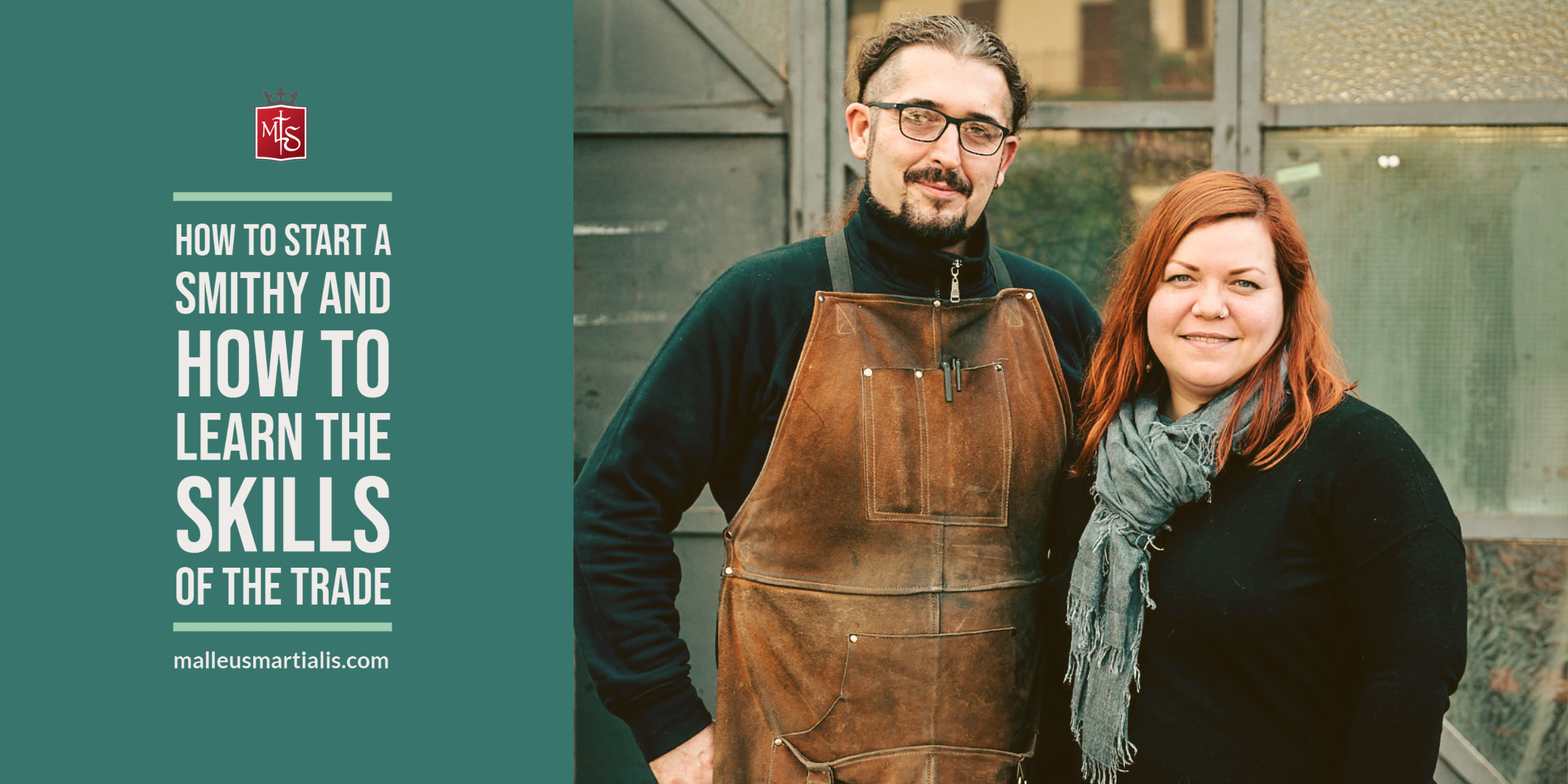 Previously we published the “Interview with the Swordsmith“; but as many of you are curious about us, our work and our skills, we decided to write a cycle of posts to tell you something more, and to share some tips too.
This is the first episode of a eight-part interview by Carlo Cavazzuti and appeared in its original Italian version on Narrare di Storia.
We added a brief, more in depth comment about the topic.

In this section we will tell how to start a smithy, or swordsmith workshop and how we had to learn the skills of the trade.

Q1. I know you both from before you opened the smithy, so I know how you ended up here, but maybe our readers would like to know how someone ends up starting their own sword-making business. Can you tell us a bit about it? Why swords, in particular?

Rodolfo: First of all, thank you Carlo for inviting us to chat! While I was studying Medicine in Florence in the early 2000s, I was already spending time in the historical reenactment world . At the same time I ended up, like many, studying medieval fencing. I was initially eager, but not especially well-informed, and fencing had grabbed me for a number of reasons; the practicing tools, cold weaponry, had put a spell on me that I just couldn’t shake off, so much so that I wanted to deepen my knowledge of its construction methodologies and pursue it as a job.

Eleonora: I come from the world of Visual Arts. I graduated from the Fine Art Academy in Bologna and, at the same time, I dedicated 15 years of my life to singing, turning towards Belcanto in the second part of my studies. At the Academy, I moved towards photography and design, then going on to complete a year-long course in Interior Design after graduation. In 2011, I began to move towards historical fencing; I was always a bit of a lazybones and I wanted to take up a sport that intellectually stimulated me as well. Along this road, I crossed paths with Rodolfo (or as Maestro Fiore would say, we “crossed swords”). So, I decided to change course and from the singing on stage, I ended up in the smithy, or rather, I put my design experience to good use.

So, we had two very different backgrounds. No Business Schools, no business experiences on our shoulders.
How was it possible?
A little startup capital – it was little and we struggled because of it -, the right mindset and the willing to improve, starting from learning how to properly run a business, studying and redesigning its structure through time, along with the essential skills to build a high-quality product. In our case, also building a proper database to develop the various models, both catalogue items and custom works, was useful. And last but not the least: choosing the right colleagues to work with.

I learned from two great teachers called Trial and Error

Q2. I don’t think there is a school for swordsmiths (if there is, please do correct me and tell us where it is), so having someone who can teach in the workshop must be important. Were you ever a student to a swordsmith? Do you have any students of your own to teach the trade to?

Eleonora: Technically there are some courses every now and again, run by great swordsmiths like Peter Johnsson and Owen Bush. The secret to learning how to forge, however, is to be in the workshop with those who still hold and practice the artistic heritage of wrought iron and from there, develop a series of “tools” that lend themselves to the art of swordmaking. These “tools” come from the observation and study of original findings.

Rodolfo: Eleonora has just revealed the big secret! Still, it took me years to understand this triviality: in fact, I went to the workshop of a craftsman who dabbled in building replicas of weaponry, but 90% of what I know today I learned from two great teachers called Trial and Error. I don’t really have students, mainly because to have students I would need to be a teacher, and I don’t feel like one at all. I have apprentices, though, who work with me and share this dream.

You can learn whatever you want. It’s only a matter of determination and connecting the dots, by applying the principles of art. Discipline, measure – as for swordmanship – learning from your  errors: never be too sentimental towards your works. Not because they’re bad, but because they can be better. There’s always something to file, to refine, to achieve the next level. As the Mandalorian would say it: This is the Way! Or at least, this is ours.

Interview with the swordsmith